Sorry, this is still in maintenance!

Hi and welcome to my blog!

If you are a first-time visitor, or looking for the posts I consider most important ('cause I'm posting a lot), please go here or click "About Me" at the top of the page!
Otherwise just have fun!

So here I am, having said I would post about our stay--and then deserting you like this!

It's not wholly my fault, though: the internet at the place we stayed at in Kelowna wasn't very cooperative (but just for my laptop, which sucks), and we had a lot of stuff planned in those few days. My mom spent almost as much money on wool as I did on already finished clothes and we went to see some nature--and, of course, KSS, which was wonderful and brought back a lot of memories.

The unanimous reaction from my old teachers upon seeing me? Hi there, how are--what are you doing here?
CiCi was with me, which explains the first part, but it was hilarious!

The most surprisingly best part of the day may have been visiting the counsellours' office, though--they were all so kind to me it was astonishing. And they still remembered me! It was a great day, overall, can't complain :D

Also, seeing my hostfamily again was weird but awesome. I really can only repeat myself: it's absolutely weird coming back and seeing everything--and everyone--again, because I thought it was over and now it wasn't and I saw shadows of my old memories everywhere: in the corners of my host family's house, in the halls of KSS, in the eyes of the people I encountered. I used to be a part of that life--but I had to realize that as much as I may still cling to my host family, I'm not anymore. There's a new girl that's taken my place with them, and as much as I would have liked it to be different, I was merely a visitor--a well-liked visitor, I do think, but I wasn't part of the family anymore the way I had been for the eight months I'd lived with them.

And that was sad. But I also think that this has given me closure, in a sense; closure I needed to get on with my life, to concentrate on the future. I will never not remember what it was like, what it felt like, what it meant to be a part of a different family, but I've come to terms with the fact that I'm not living that life anymore.

The Abitur is looming, and so are exams, a science (actually, STEM-subject) project I'm taking part in, and new friends and friends-to-be. Life is ever moving forward, and the realization is as painful as it is hope-inspiring.

And now finally, the promised pictures: 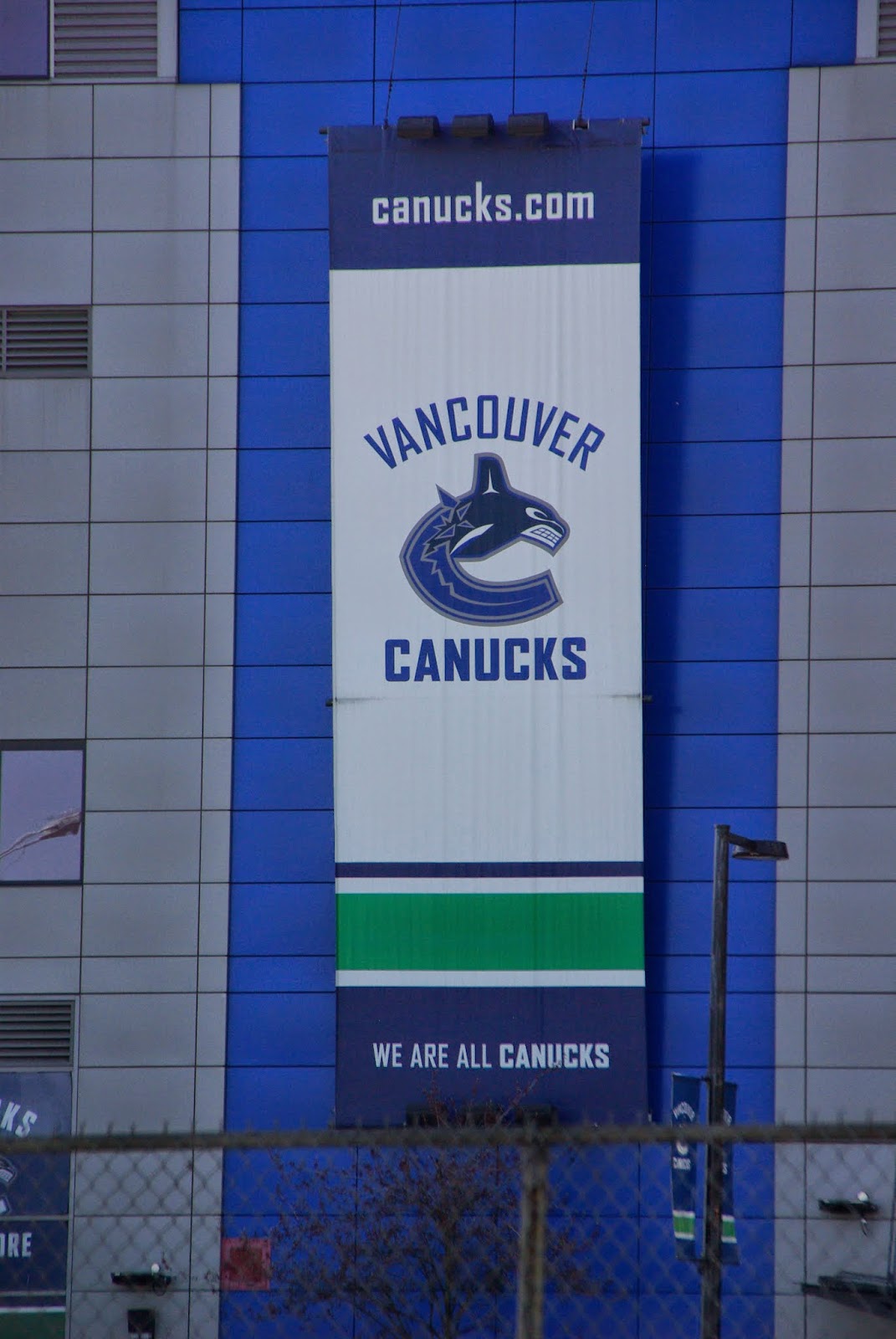 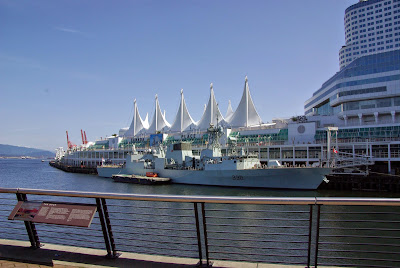 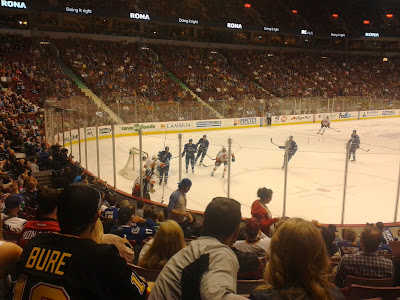 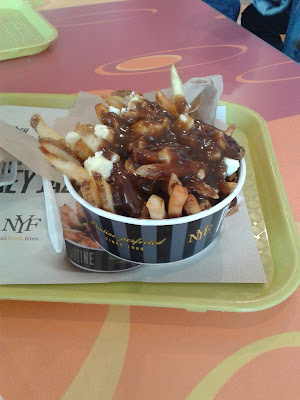 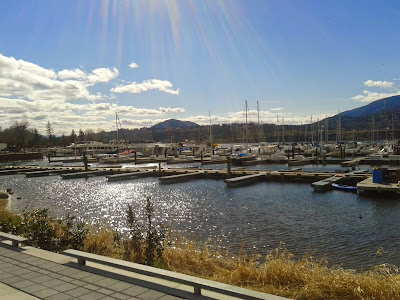 Soooo... today was an unlucky day, of sorts. So all you get is a short recap, and tomorrow probably a couple of pictures :) 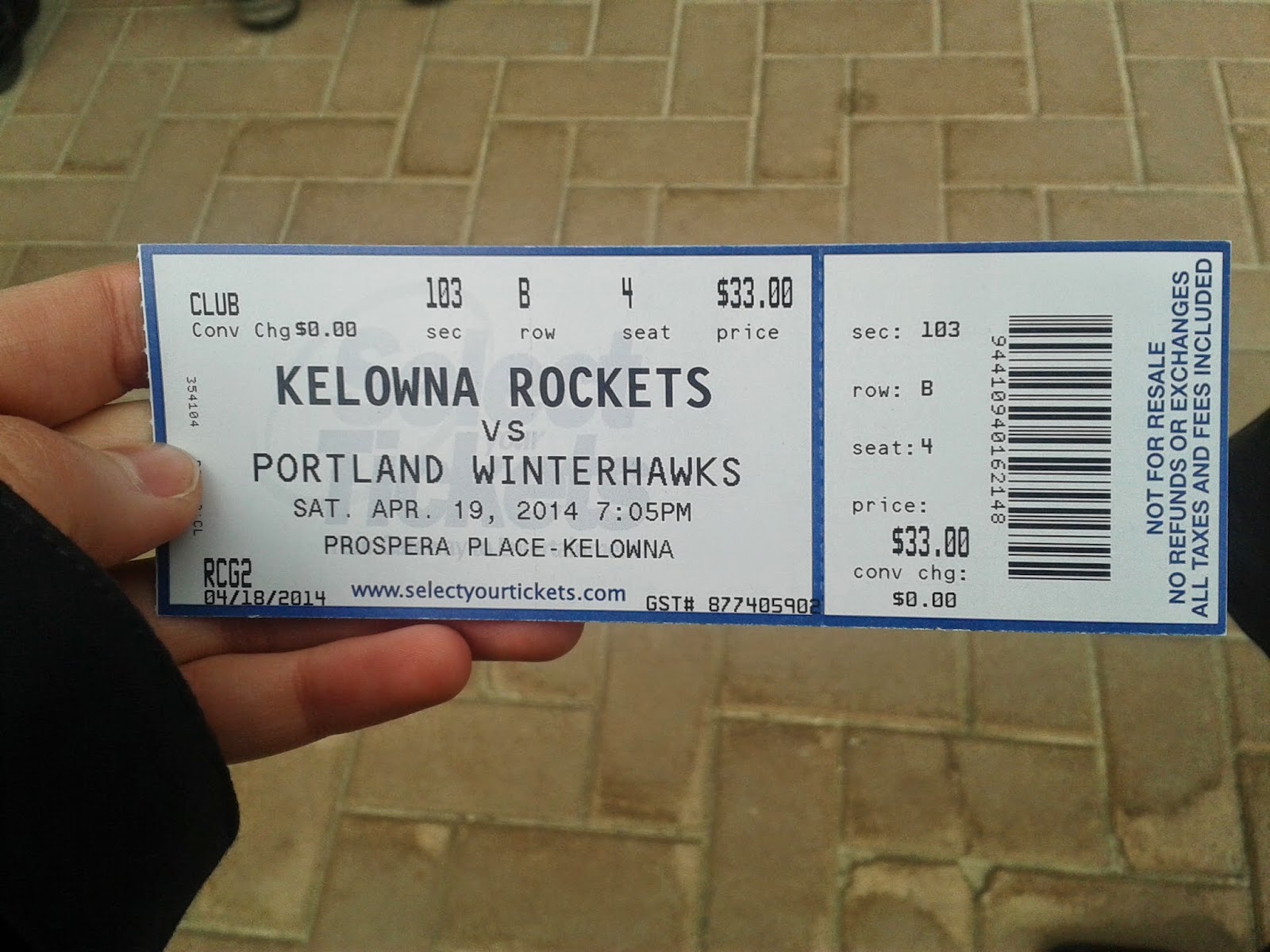 Anyway, the Rockets played today. And lost. 5-3, outshot 53-27 (I kid you not)--and honestly, they were lucky that it was only 5 goals their poor goalie let in, because aside from a strong first period (3-1 Kelowna), their team's showing was abysmal. They wouldn't have deserved the win had it been handed to them on a silver platter.

But it was pretty good hockey--fast, frantic at times even, and just sloppy enough to be a delight to watch. I would of course have preferred hat the Rockets won, but honestly--the game was good enough despite the loss.

The most confusing thing though must have been the fact that they're playing Portland--the Winterhawks. Or short, just the Hawks.

They had an equally abysmal showing: after going down 2-0, they managed to get a 3-2 lead--only to have Seabrook take a dumb penalty that led to the game-tying goal with less than 10 seconds to go, and subsequently lose in overtime.

'Lumbus were the only ones who actually managed to do what they were supposed to: get the W. (Their first playoff win in franchise history! And against Pittsburgh, no less!)

But I'm incredibly sorry that after saying I'd be back, I was silent for almost a whole week :o It's not even my fault, at least: we didn't have proper internet connection until today, so it wasn't just you I was neglecting...

Special shout-out goes to my friend Denise, who I knew through other means but had no idea was reading this blog :o Like whoa, is this world small...

First of all, the hockey game:  It was amazing! Vancouver won 5-1, but the whole thing was marred by the fact that one of the Creepy Swedish Twins was checked into the board, and then lay on the ice. Both teams were really decent about it, though; they were standing in a circle around Daniel (the twin lying on the ice), so even my dad and I—sitting diagonally across from where it happened—couldn’t see what was going on.

But let me tell you one thing: I had a clear shot of Daniel lying on the ice by the boards while play was still going on next to him, and I will never forget that moment of startling clarity I had when I knew something was seriously wrong: he was lying on the ice, and instead of trying to get up like I’ve seen every hockey player to this date try at least, he was just—just flapping his hands helplessly, and it may have been one of the most horrible sights in my life…

Other than that, it was really great--fast, and we had pretty good seats...

And talking about hockey... You know where we are? In Kelowna already!
Which means we're here in time for the playoffs, so we're catching a game tomorrow.

We meant to stop on the way, especially in Revelstoke, but let's just put it like this: either the RV parks we looked at were too small, or the town was more than scary. I didn't know that there were this many almost-ghost towns up here :o But there are, and we didn't want to stay any longer than we had to. So now we're staying in Kelowna for a whole week (pretty much exactly), hitting it off with visiting my host family tomorrow to say Happy Birthday to my host mom.

The funniest thing happened today, though!
We went to Prospera Place to get tickets for tomorrow (second row! I'm so happy we still got them, because most of the good tickets are gone; for today, for example, only single tickets were still available), and you know who we saw on the bus? The new host girl my family has!
The conversation we couldn't help but overhear (since she and her friend were talking very loudly, very detailed in German) is nothing I could repeat on here, made for a very amusing drive nonetheless.

We thought we might stay in Armstrong yesterday, but that was one case of 'too small'--one good thing did come of it, though, because I recognised it! From the fair I went to with my first host family last year! That was pretty cool, and kinda weird, too.

I know this is kinda all over the place, but please forgive me; it's been a long week already. We went shopping in Vancouver, and I spent a couple hundred dollars, which may be the most I've spent, ever. I really love most of the stuff I bought, though, so it was entirely worth it (especially a men's sweater I picked up from American Eagle's sales racket, which is super comfy and too big--or maybe super comfy because it's too big :D). I simply love American Eagle, what can I do? :D

I'll have to go and write a German essay today--analysis and comparison of two horrible, horrible German Romantic poems--and at some point we want to eat a Quesadilla, but other than that, I have remarkably little to do... well, there is a long HP fanfic waiting for me (205k; it said  eight hours when I began, but I still have almost five left and have spent more than five on it already, I'm sure... it's delightfully long and well written, for the most part!).

As for our plans... There's the game tomorrow, then we'll go to Osoyoos, maybe Fintry (which is a national park up here), one day (my birthday!) is reserved for visiting KSS and then going out to dinner in the evening, and then we'll see what we'll do with the rest of the time we have here. But it's not that much, which is kinda weird :o

Back in Vancouver. Almost exactly 10 month after I've last been there. What a weird, weird feeling.

The flight was long but uneventful, pretty chill--there were a few bumps on the way from Montréal to Vancouver, but nothing to write home about. Montréal Airport was kinda unfriendly though--they ripped my study permit out of my passport and wouldn't even give it to me for safekeeping. "Legal document," she said in her stupid French-Canadian English. "Has to be destroyed." >:(

Anyway, we're in Vancouver now, just back from breakfast actually. There's a cheerleading competition here in the hotel we're staying, so my actual plan--going to Tim Horton's straight away--was thwarted, but I had a Bacon 'n' Egg McMuffin and a hash brown from McDonald's, and an Iced Maple Macciato (tasty, but now my head is about to split apart, I'm guessing from the caffeine) and then an Iced Black Tea from Starbucks.
Right now I'm sipping my PB & Chocolate (with Banana! Sooooo good) smoothy from Jugo Juice--it's so nice to be back, seriously.

Today we're probably going to go to Stanley Park, and then in the evening (less than 5 hours away oh my god) I'm about to see my Very First NHL game :o